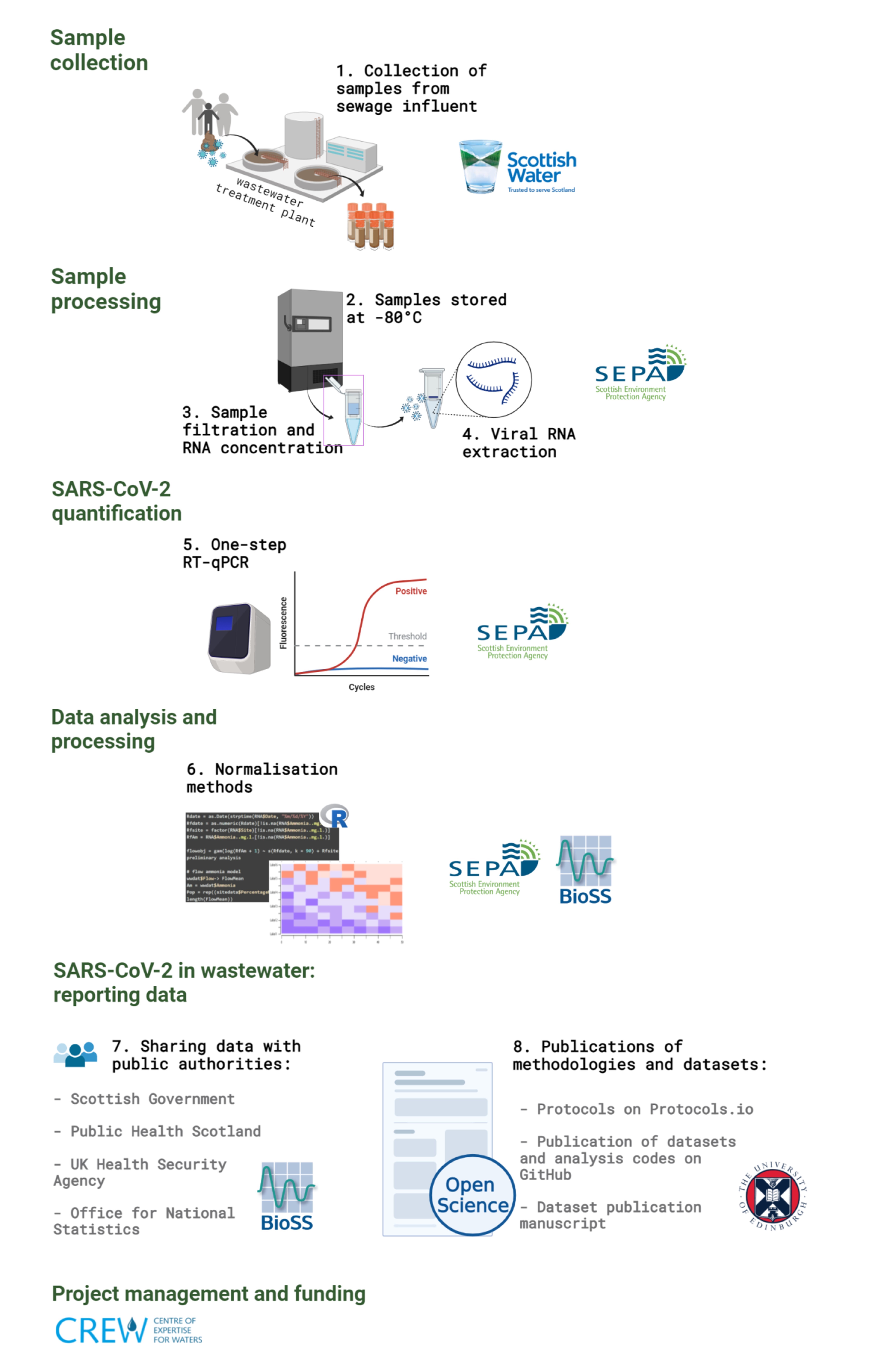 A brief description of the methodology for quantification of SARS-CoV-2 in wastewater is presented here as follows.

Prior to processing, the samples were spiked with a known quantity of Porcine Reproductive and Respiratory Syndrome (PRRS) virus as a sample process quality control. Then samples were clarified to remove particles and filter-concentrated to obtain sufficient viral RNA. RNA was then extracted, and SARS-CoV-2 gene copies (as well as the PRRS control) were quantified using one-step RT-qPCR. More specifically, the amplification of the SARS-CoV-2 nucleocapsid gene N1 was monitored.

Depending on the amount of gene copies per litre obtained, samples were described as “Negative”, “Weak Positive”, “Positive Detected, Not Quantifiable” (“Positive DNQ”) or “Positive”. The cut-off values used to apply this description were determined by a standard dilution series analysis, which allowed the identification of the limit of detection (LoD) and the limit of quantification (LoQ) values. The LoD is the value at which the test has been determined to detect the virus material with certainty, and in this case it was set to be 1,316 gc/L. The LoQ is the value above which the test has been deemed to measure the virus material with a high degree of accuracy, and in this case was set at 11,368 gc/L.

Although the gene copies per litre values described above are useful indicators of the presence of the virus in each specific site, they do not consider the dilution factor caused by the incoming flow in wastewater or the size of the population of each site. For example, in periods of heavy rainfall, the viral particles will be more diluted in the wastewater compared with periods with less rain. Additionally, in some areas the industrial discharges in wastewater will affect the incoming flow and therefore the viral concentration coming from household waste. The size of the population can also produce biases. A certain number of positive individuals in a small catchment area can produce higher values of viral gene copies compared with the same number of positive individuals in a larger catchment area.

A better representation of the spread of the virus within the population can be derived from normalised values that use the site population and the incoming wastewater flow to determine the million gene copies per person per day. The detailed normalisation protocol is provided in the Protocols section. In short, to produce a daily value of million gene copies per person, the raw gene copies per litre value is multiplied by the daily flow total and divided by the population served at each site. The flow for a specific site (waterworks location) is either measured directly or estimated using an ammonia data.